Happy Fourth of July! Today marks the day when a new nation, the United States of America declared itself independent of the British. In order to celebrate this we light fireworks, hold parades and this year; a fair in the Montgomery Park.

Despite it being a holiday, there are plenty of people who do not celebrate the Independence Day. In an attempt inspire those; I set out to ask residents of Red County how they were planning of celebrating their Fourth of July. 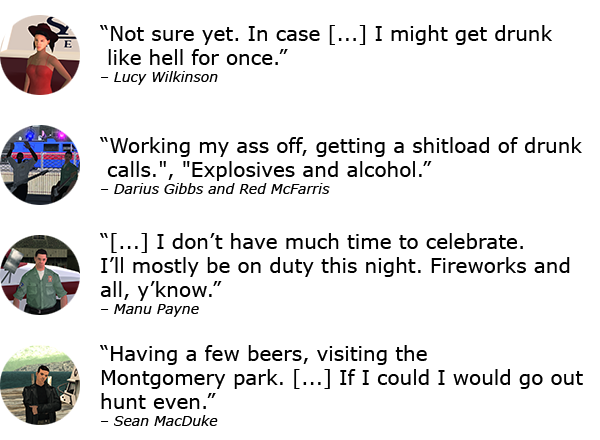 As you can see there is certainly more than one way of celebrating the Fourth of July; be with explosions, getting wasted or 'singing' at the park fair.

Whatever you choose, stay safe and have a great Fourth of July. God bless America!

First of all I would like to thank you all for being so pateint over the last few months as I know the User Control Panel was lacking some attention. I have now returned as a Developer for Red County Roleplay and will continue to improve the User Control Panel and all web related services for the seeable future.

I expect most of you to have little faith in me as a developer as I have been and gone so many times over the last year, just to inform you that all of my departures were unplanned and I would have loved to have continued developing the User Control Panel. However, due to work and real life I was unable to.

The first thing I began doing as soon as I returned was working on a small release just to give the site a bit of a jazz up so here are the changes:

That's just the features that I can think of myself! If there's anything you would like to see in the next version of the User Control Panel then head over to the forum and post a suggestion now!

If you have any questions or want me to share some knowledge with you then don't hesitate to contact me on [email protected] I aim to respond to all emails within 12 hours unless I am sleeping.

COMMENTS ARE ENABLED SO REPLY

The time has come where the SA-MP development team graces the community with a new update! In this case, 0.3.7. The server has been upgraded to the new version which you must download in order to continue playing.

Factions on RCRP - Have your say!

Red County Roleplay would be nothing without its factions, so we're asking you to help us help them, by telling us how you think the faction system at the moment is going, what you think of the factions currently in the server, and how we can improve the system as a whole.

Your feedback is really important to us, so we'd appreciate it if you could take a few minutes to fill out a short, anonymous survey, or have your say on the forum.

Click here to have your say through the anonymous survey.

Click here to have your say through the forums.

Thank you for your input!